This is the last installment in my series covering the basic formations that we could see the USMNT play (for now). The 4-3-3 is very in vogue as an attacking formation, it employs two center backs flanked by fullbacks or outsider backs. The midfield is typically composed of a holding mid who plays behind two centrally located midfielders. On the top of the pitch is a center forward flanked by two wing forwards. In general, the formation looks a little something like this: 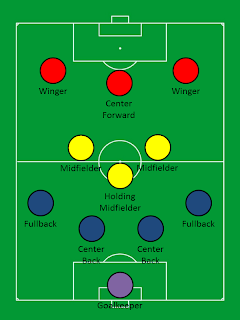 The 4-3-3, as stated above, is an attack-minded formation. The basic premise is that the more players you can get up the pitch and into the opponent's attacking third, the more dangerous you become and the more you force your opponent to play defensive and reactive football. It is a proactive system that requires precise passing, great awareness, and a reliance and trust in your teammates.

The role of the back four is first and foremost to defend. Two center backs bear the bulk of the defensive responsibility by accounting for the other teams forwards, tackling hard, snuffing out fires, and playing physical in the air. The two fullbacks contain the other teams wingers or other attackers coming down the flanks. They can also support the center backs by moving inward.

The midfielders are all predominantly central midfielders and clog the center of the pitch to force play to the less dangerous wide positions. Holding mid has a greater defensive responsibility as he is typically located in the area near the opposing team's playmaker and must make life hard for him.

Forwards have more defensive responsibility in the 4-3-3 than in either the 4-4-2 or 4-5-1 previously covered. Due to the advent of the attacking wingback, the outside forwards must track back in order to cover the advancing overlapping runs of their counterparts. They have responsibility for the outside portions of the pitch as the three midfielders typically are relied upon to clog the middle of the pitch. The center forward is called upon to pressure the center backs to try to force them into making errant passes or give away possession by playing low percentage long balls up the field.

Because of the large amount of attacking players that are put out onto the pitch in the 4-3-3, it is vital to maintain possession. The center backs must not only be adept and hard-hosed defenders, but also be comfortable with the ball at their feet. Their outlet balls to the midfielders must be spot on and they also act as a pressure relief if things get too clogged in the midfield. The fullbacks are two-way players and their overlapping runs provide width to the attack. Because the three midfielders all occupy space in the center of the pitch, drawing opponents toward the center of the field to try to dispossess them, space on the wings is vacated for the fullbacks to move forward and launch crosses into the box or link with the midfielders and forwards.

The chief offensive role of the midfielders is to keep possession of the ball and link play between the defense and offense. Technical ability is paramount in the midfield. Playing all three midfielders centrally sometimes results in having to work the ball back and forth in tight places. Accuracy and speed of play in offensive touches is at a premium in the 4-3-3. If space does open up, they need to have the awareness to see and attack that space. Each midfeilder, but especially the two attacking mids, must become creative playmakers that can see the field, understand the opposition's formation, and unlock the deficiencies they find.

Since three forwards are present, each has a flexibility that is not necessarily afforded to them in a 4-5-1 or 4-4-2. They can drop further into the midfield to collect the ball without ceding valuable space since the other two forwards can continue to stretch the field. Wing forwards can either making darting runs towards goal looking for through balls or runs to the outside of the field, stretching the defense wide to open gaps and looking for balls to the corner to result in a cross or 1-on-1 opportunity from the flanks. The center forward typically plays one of two roles. The first is to play in a "false 9" position, dropping back into the center of midfield to utilize the space between the defense and midfield to collect the ball and distribute to the wings or run at the central defenders. The second is to play as a physical frontman, winning balls, providing holdup play and distributing backwards to the attacking mids, and wreaking havoc with physical play in the box to win crosses provided by the outside fullbacks or wing forwards.

Attacking with a 4-3-3 can allow you to field as many as 8 attack-minded players in the same lineup and really take the game to the opposition. It creates natural passing triangles that give whomever is possessing the ball a wealth of options going forwarded and multiple options backwards if the forward options are closed down. Additionally, the attack can come from straight up the middle of the pitch through the midfield and to the center forward, inside-outside from the midfielders to attacking fullbacks or wingers, or outside-inside by wingers making diagonal runs. The attack can be creative, varied, and extremely dangerous, allowing exploitation of whatever weakness, tactically or technically, is present in the opposition.

Success is reliant on controlling possession, and if there are not enough technically gifted or intelligent players to fit into the team, then the results can be dire. Because the formation is so attack-minded, losing possession can result in deadly counterattacks. Moving so many players into attacking positions can leaves holes that can be exploited by a disciplined counterattacking team.

Originally, Ajax. More recently, Barcelona. The Netherlands side became famous for their 4-3-3 and Total Football concept in the 70s. Johann Cruyff and his cohorts became famous for their attacking and creative play. Today's Barcelona side, arguably the greatest team of all time (and this was written halfway through the 2010-2011 campaign), has reinvented the 4-3-3, with Busquets, Xavi, and Iniesta forming one of the greatest midfields of all time behind consensus the consensus greatest player in the world Lionel Messi who plays in the false 9 position flanked by Pedro and David Villa. Alves and Abidal are model fullbacks who attack with pace, and, especially Alves, play an advanced role at least as often as they play defense. Pique and Puyol are a rare breed of supremely gifted technical players who are very comfortable in possession but also tackle hard and are defensively solid in technique and positioning. They have become the standard by which all other 4-3-3's, and all other teams, are measured.